EARTO Launch of the Economic Footprint Study: Impact of 9 European RTOs in 2014 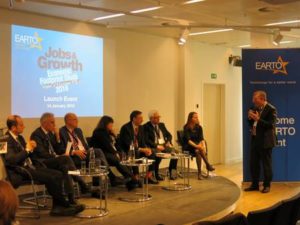 On 14 January 2016, EARTO organised an event launch its new publication on “Economic Footprint Study: Impact of 9 European RTOs in 2014”. This was the occasion for EARTO members to discuss and debate on the Impact of RTOs and R&I Investments with around 90 EU Institutions representatives and other R&I stakeholders.

The main findings of the study are that, in 2014, the aggregated effects of the core-activities as well as activities generated through the bilateral contracts and the spin-offs of these 9 RTOs, resulted in:

The study also showed that for each job created in those RTOs, 3 jobs were created elsewhere in the European economy in 2014 and for each €1 invested in these RTOs in the form of basic grants, €3,8 returns flew back to governments.