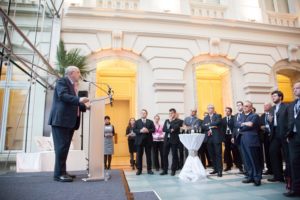 The 6th edition of the EARTO Innovation Prize was held on 16 October 2014 at the prestigious BelVue Museum, next to the Royal Palace. European Commissioner for Competition Joaquín Almunia, guest of honor and keynote speaker, highlighted during his speech the importance of investing in research and innovation as tools for competitiveness, growth and jobs. After his speech, Commissioner Almunia handed the prizes to the winners.   The first prize was awarded to TECNALIA Research & Innovation for BIOSIMIL, a computer vision based search engine that retrieves to clinicians biopsy images stored in biobanks worldwide by means of their visual clinical relevancy.

The second prize was given to SP Technial Research Institute of Sweden for GreenFeed, a fishmeal substitute for farmed fish made from wood-derived sugars rather than wild fish byproducts. As to the  third prize, it went to  Fraunhofer-Gesellschaft for IND²UCE, preventing disclosure of confidential information, identity theft and loss of reputation and so contributes to making the digital world safer.

Photos of the event