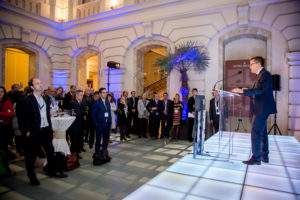 The 7th edition of the EARTO INNOVATION AWARDS CEREMONY was held on 14 October 2015, 17.30-21.00 at the prestigious BelVue Museum, next to the Royal Palace. This year, the structure had been reviewed in order to present a wider range of RTOs’ work by creating two categories: “Impact Delivered” and “Impact Expected”. Our guest of honor was European Commissioner for Research, Science & Innovation Carlos Moedas who delivered a keynote speech highlighting the importance of RTOs as links between academia and industry. After his speech, Commissioner Moedas handed the prizes to the winners.

TNO received the 1st Prize in the Impact Delivered category for the development of 7XE EXTRACTOR, an innovative welding torch that extracts fumes reducing the welder’s exposure by at least 90%.

In the Impact Expected category, CEA received the 1st Prize for the development of NAWACap, a new generation of ultra-fast carbon batteries that can be recharged in a few seconds, for a million of cycles.

You can find more about those innovations and other finalists in the 2015 EARTO Innovation Awards brochure.

Photos of the event