Congratulations to EARTO Members VTT and Helmholtz who were awarded the EARTO Innovation Awards 2018 yesterday during a ceremony held at the BELVue Museum in Brussels. 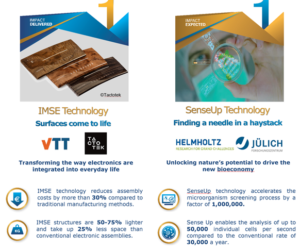 Created in 2009, the EARTO Innovation Awards highlight the various areas of RTOs’ activities and illustrate RTOs’ concrete  contributions to innovation with high societal impact through the two categories: “Impact Delivered” and “Impact Expected”. The Awards’ independent jury chose the best innovations of the year. Our Jury Members this year were:

On the same day, EARTO has published the 2018 edition of its “Innovation Awards” brochure, a collection of thirty-two innovations featuring EARTO members, which gives a flavour of the wide range of RTOs’ work. Such innovations demonstrate RTOs’ capacity to support Europe’s innovation performance and their focus on solving today’s challenges and delivering impact. The brochure includes articles on all RTOs that took part in this year’s competition with a special focus on the 6 finalists which are, in addition to the two winners VTT & Helmholtz: CEA, TNO, Tecnalia and Fraunhofer.